NB: Much of this post was actually written in 2016, but has been updated and posted in October 2017.

A year ago, a politician in one of the world’s largest countries came up with a campaign slogan, “Make [name of country] great, again.”

“Wow,” I thought, “that is such a fantastic idea.” I slept well, reflecting on that smart slogan until, in some sort of dream phase in the middle of the night, I realized that the message had to be tweaked.

Why should it be just one country? So, I replaced [name of country] with the world, as in: “Make the world great, again.” 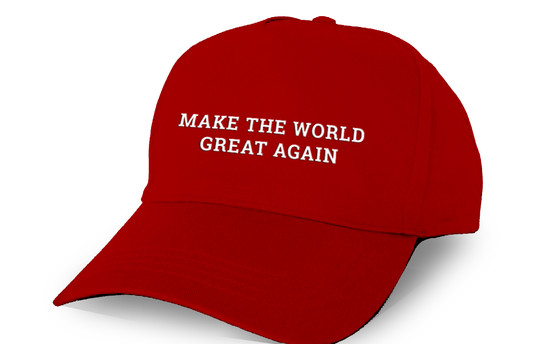 I began to slept even better the next night, knowing that the entire world would be great, again – not just one or ten countries, but all 195! http://www.worldometers.info/geography/how-many-countries-are-there-in-the-world/

Then, during this intense dream phase, I realized that the message had to be tweaked even more. Unfortunately, the entire world has never been that great for everyone. Many people live in oppression. Many more people in the past also lived oppressed, impoverished lives. So, we have no right to add “again” to the phrase.

The slogan was now so fantastic I imagined that it couldn’t be improved, ever. So, I spent the next day painting a banner. It was a banner that could be hung from my sundeck that all the world could see, at least that portion of the world that lives in Vangshylla, and can see the sundeck. Unfortunately, that day it didn’t just rain, it poured. Not a single soul could be bothered to look upwards into the sky to read the banner.

That evening, I was sure I would sleep through the entire night, without interuptions. Not even the honking of the geese overhead, flying south, would disrupt my slumber. It was true, the honking geese did not disturb my sleep. It was the banner, or more correctly, the slogan on the banner, that did.

The problem this time was not with the slogan. Rather, it was what was missing from the slogan. It didn’t seem fair that an Obama, or a Hilary or a Donald or even a Bernie should be stuck with the job of making the world great. If the world was to become great, then everyone had to contribute.

The next day I found more material so that I could add a second story to the original banner. It now read, “Working to Make the World Great!”

By now I had grown to expect waking in the middle of the night. Thus, it came as no surprise at all, when I woke up realizing that there were still challenges with the slogan. Yes, we can all work to make the world great, but I’d actually prefer you to do it my way, rather than your way. It took only a few minutes to come to the realization that “My Way or the Highway” is not a particularly mature approach to making the world great. Then, something unusual happened. I fell asleep.

Sometimes, allowing one’s subconscious to work on a problem is much better than any other approach. When I awoke in the morning, I felt refreshed. After breakfast, I looked at the banner and knew precisely what needed to be added. Within an hour the banner was finished. It was a sunny day, so people could look up and read,

“Working Together to Make the World Great!”

Postscript: There aren’t many people who live in Vangshylla, and even fewer who can look up and see the banner. That isn’t important. That slogan is actually addressed to just one person, myself, and changing my attitude to each and every person I meet.