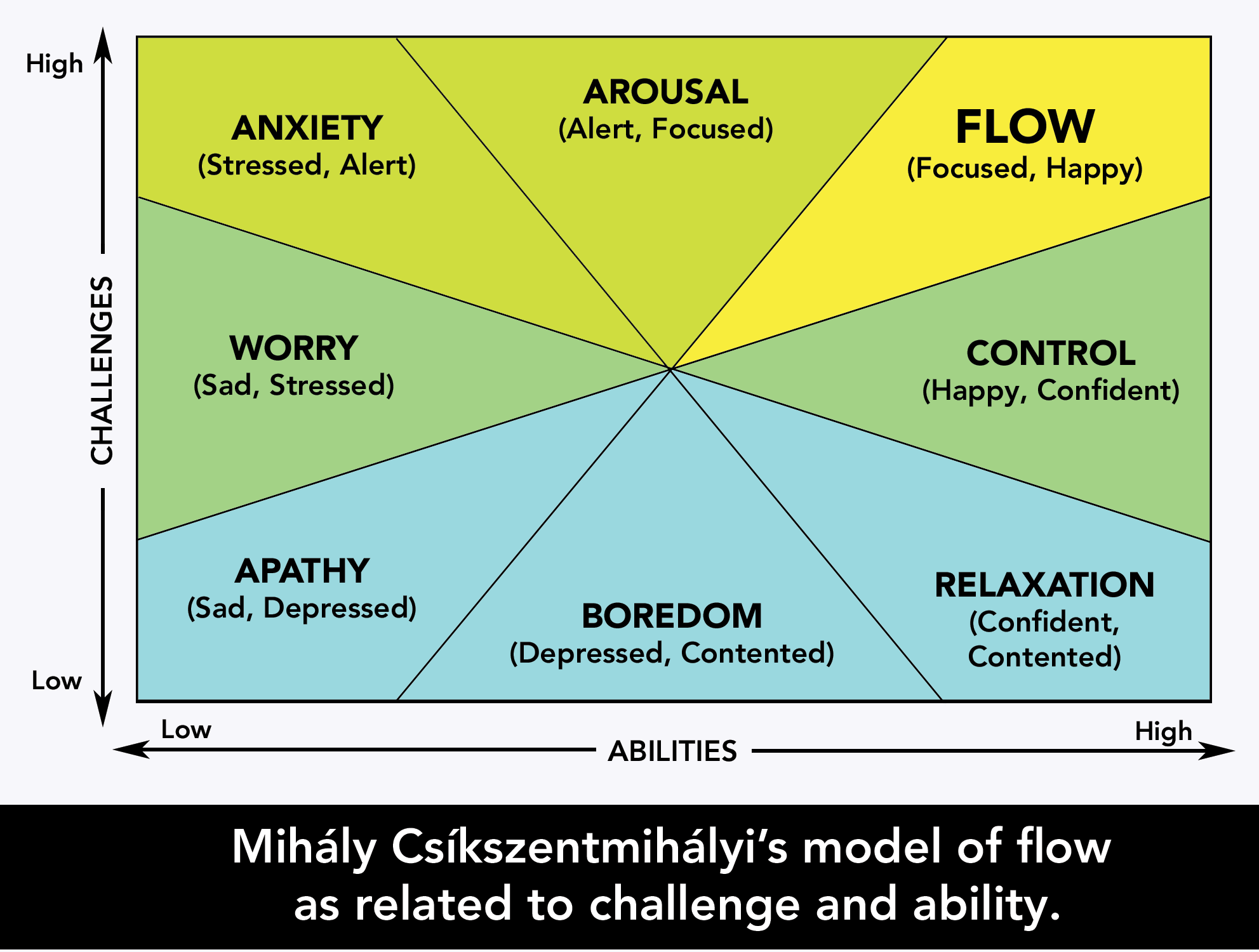 Flow: The Psychology of Optimal Experience, presents Mihály  Csíkszentmihályi’s theory that people are happiest when they are in a state of flow,  which is a state of total absorption. In this state, a person is intrinsically motivated, goal-oriented, but seeking challenges that increase their overall happiness.

In Csíkszentmihályi‘s model, there are seven other states, but these are all in some way inferior to the state of flow.

At the prison where I worked as a teacher, my primary focus was to encourage flow. Prison sentences can be long, and unbearable. Allowing inmate students to immerse themselves into a topic, most often has a positive effect. In particular, I found that it was easiest for inmates to enter a state of flow  through creative activities. The actual creative field was not important. For some it was through music, for others it was artistic painting. Drama and theatre were often used. Woodworking, knitting, ceramics were other areas. This does not mean that every inmate I was in contact with was able to flow.

One group that did not seem to benefit from this approach were those diagnosed, or more often suspected of being, sociopaths. These people had their own manipulative agenda that could be mistaken for educational activity, but was anything but.

One does not have to work very long at a prison to realize that inmates learn more working in a hobby room, than they do reading in a classroom. It has been documented, for example, that delinquent behavior can be significantly reduced in adolescents, if they are given the opportunity for two years of enhancing flow through such activities. (See: Nakamura, J., & Csikszentmihályi, M. (2001). The concept of flow. In Handbook of positive psychology (pp 89-105). New York: Oxford University Press.)

The Norwegian prison system has seen the positive impact that flow in creative areas has on inmates. Many prisons provide inmates with the opportunity engage creatively. Bands and theatre groups are actively encouraged. In November and December, inmates are given the opportunity to use the hobby room to make Christmas presents for their loved ones.

People who have experienced flow feel focused on what they are doing; ecstasy; great inner clarity, knowing what needs to be done, and how well they are doing; knowing that the activity is doable, that their skills are adequate for the task; serenity; timelessness – thoroughly focused on the present, hours seem to pass by the minute; intrinsically motivated.

Flow experiences lead to growth. It is working to master an activity. To maintain this state, increasingly greater challenges must be sought out, resulting in skill improvements, personal growth and feelings of competence.

Flow has a documented correlation with high performance in the fields of artistic and scientific creativity, teaching, learning  and even sports. It encourages persistence and achievement, lowers anxiety and raises self-esteem.

Sometimes, inmates need to move beyond art. For example, at one time I had a older herder as a student. He had actually signed up to study at the school because he wanted to avoid working in the pallet factory. In our conversation it turned out that he had a computer, but didn’t know how to do anything with it, except surf the net!

The prison has access to any number of text books, on almost any subject. Yet, they are of very little help, when a sizable minority of potential students are functionally illiterate.  Even, if an inmate can read, it doesn’t mean that a textbook will be meaningful. The herder was taught how to use Microsoft Office products, based on his one and only consuming interest – herding. He was able to write texts about it, with graphics showing it, in Word. He was able to make PowerPoint presentations. Most importantly, he was able to model his herd, using Excel, where he could see the economic consequences of different decisions.

The herder was only in prison for a short time. Soon after he left, another herder was imprisoned. He had obviously been in touch with the first one, because he came to the school and asked to learn Excel, so that he too could model his herd.

Mathematics is often difficult to teach in a conventional secondary school, because students, even in the same class, are at different levels, and have different abilities and interests. At a prison school, this is also the situation. However, by focusing on the individual and – in particular – by giving individual, rather than group, instruction, some inmates can have surprisingly high  learning curves in mathematics. They frequently surprise themselves. The key is to help that person unlearn those past approaches, that result in mistakes. Once these have been successfully unlearned, more appropriate problem solving techniques can be learned and developed.

Not all school administrators appreciate this focus on flow. Some are particularly keen on increasing the number of exams inmates pass. In their eyes, it improves school statistics, and makes the school look better. These administrators don’t seem to be aware that most inmates do not have the prerequisites to pass exams. Throughout their entire lives, most have been betrayed: at home, at school, by social workers, and by society in general. Inmates need to have positive school experiences, before they are able to study more rigorous subjects, and pass exams.

While there are many exceptions, the majority of criminals do not engage in criminal activity during their working hours. It is their leisure hours that are the problem. That is why it is so important to help inmates develop all consuming hobbies. If they are spending their time after their release restoring a Harley-Davidson CVO Street Glide, then they won’t be spending their time discovering the best way to break into your house.

Originally this weblog post was titled Miswanting. This theme seemed to be driving in two different directions simultaneously, so it was split into two sections: Leisure followed by Flow. Soon, I realized these would have to be published as two separate weblog posts.

While working on Leisure, it became apparent that it was going to be easier to operationalize my thoughts, by working on a specific example. So, rather than writing more generally about leisure, I decided to focus on Christmas, and what I regard as the festive season’s most serious challenge – its lack of structure and moderation.

This split into two posts, left me with a few paragraphs that didn’t fit in either location, the introduction to miswanting. Here it is, reworked as an afterthought.

Miswanting is the coveting of something that one mistakenly believes will make one happy. For a short introduction to the term, see: https://www.apa.org/science/about/psa/2004/04/pelham.aspx

Miswanting wealth. Typically, people covet money. Yes, one needs a minimum of it in this post-modern world, and far too many people have insufficient quantities. Money in excess can lead to other challenges, that can be just as numbing as poverty.

Miswanting leisure. People also covet leisure, and renounce work.  It is a bad choice. It turns out that almost everyone is happier working, than engaging in leisure activities! Yet, they imagine that leisure will make them happier.

Even though I am retired, I treat five (or even six) days of the week as work days. I may not put in as many hours as in my younger years, but I show up for work with an agenda, and a schedule. My goal is flow.

One Reply to “Flow”