The first primitive Scandinavian ski was found in a peat bog in Hoting in Jämtland County in Sweden which dates back to 4500 BP (Before Present) or 2500 BCE (Before Christian or Common Era).

The oldest set of skis is probably the Kalvträsk skis, found in 1924, at Kalvträsk near Skellefteå, Sweden. Two skis measuring 2040 mm by 155 mm and a shovel shaped ski pole was 1560 mm long. Carbon dating indicates that the equipment is 5200 years old. The skis were made from pine that had grown on a slope, causing the wood to become denser than ordinary. Each ski had four holes for the bindings, which corresponds with ancient skis found in Siberia. The ski pole is similar to ski poles used in historic times by the Sami people in northern Scandinavia. The equipment is on exhibition at the Västerbottens Museum in Umeå.

While skis are useful for exercise by healthy adults, they are not particularly useful for routine winter transport by small children, or adults who have passed middle age. It is here that the kicksled, or spark, offers a more suitable vehicle.

A Kicksled museum is located in Piteå, Sweden, where the vehicle was first developed in the 1860s and 1870s. The museum claims that “The spark is a fantastic transport tool that is in every way in time. It is energy-efficient, environmentally friendly and in many cases shapely fashionable.” https://www.pitea.se/Besokare/Se–gora/Produkt/?lang=sv&TLp=462944 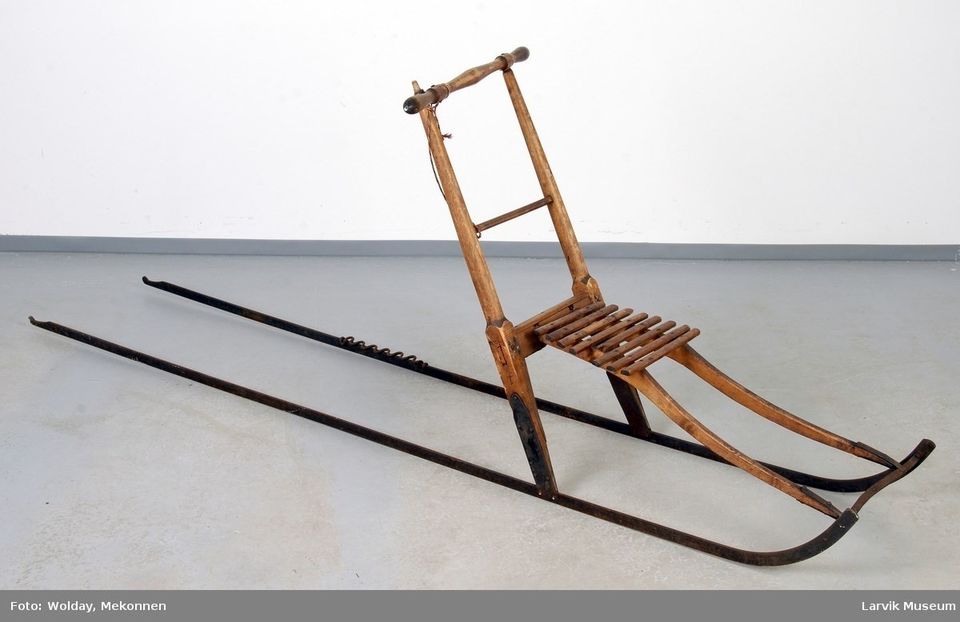 The first kicksleds had stiff wooden runners and were heavy. In 1909 Erik Timander and Anders Bertas in Orsa, Dalarna County, Sweden designed and produced the first modern kicksled, the Orsasparken, with its two patented spring-steel runners.

The traditional spark is fitted with a chair, which is useful for carrying a passenger, while the “driver” stands behind on one of the runners, and kicks the vehicle forward.

In 1994, Hannu Vierikko founded Kickbike Worldwide that developed modern  scooters and kicksleds. He claims that these represent Finnish design at its best, by combining unique design with functionality.

“The Kickspark is a new design of a kicksled. Traditional style kicksleds have been in daily use in Scandinavian winter since the beginning of 20th century but for some reason the design has remained the same while other products have been developed a lot. The new, innovative design takes the old winter product to a new level. The Kickspark suits as well for all round use as for sport and fitness. The frame is light and stiff offering excellent control also at high speeds – or for tall riders.

“The handlebar comes with comfortable and warm hd foam grips. You can fold the frame by loosening two bolts or completely disassemble the sled using 6 bolts. This way transportation and storage is quite easy.

“Kicksled can be used anywhere, where you would use skis or ice skates and quite a bit beyond too. For the best ride, choose runners for the surface you plan to ride on. The Kickspark comes standard with steel runners, that can be used in most conditions: ice, snowy and icy roads, paths and trails with a relatively hard snow surface. Those work fine if one can walk on the snowy surface without sinking. The standard runners are made of 5 mm wide and 28 mm tall zinc coated spring steel.

“Snow Runners are plastic skis that support the kicksledder even on snowmobile or cross-country ski trails. Snow runners come in two widths: 36mm and 56mm for softer tracks. Those glide better than steel runners in snowy or cold (-10C/15F or colder) conditions.

“Ice Runners are designed exclusively for kicksledding on ice, similar conditions as skate touring but work better than skates on rough or soft ice surface. Ice Runners glide amazingly well and quietly, yet the grip and control are far better than in the Standard Runners.

“Kicking on snow-free ice with the Ice Runners is a whole new winter sports and outdoors experience. Racers reach speeds of 25-40km/h depending on the distance (100km record being 3:38:50). Long touring on (sunny?) spring ice is something Kickspark riders keep talking about when the ice is gone.

“Even the fastest sled needs a grip under the kicking feet to propel it forward. On snowy surfaces in temperatures well below freezing normal winter boots work fine. On an icy road or lake studded winter boots/ running shoes or crampoons work better. Crampoons are studded (steel studs normally) kicking soles that can be attached to virtually every shoe. The best alternative are spike shoes originally designed for (Finnish) baseball or orienteering equipped with 9-12 mm spikes, some use even golf shoes. Stability/stiffness of the shoe is important.” http://www.kickbike.com/en/kickspark.html

So much for the commercial announcement. With a sales price of about NOK 3 000 (CAD 500) including freight, I won’t be buying a Kickspark Max anytime soon. However, that much money can buy a lot of material to use in the Unit One workshop.

Anyone with a derelict spark they want to get rid of, is invited to take contact.