There are two fundamentally different ways to cut wood, with or across the grain. Wood grain is important because it affects the shape of saw teeth. A rip-cut comes from rip: to split or saw timber in the direction of the grain, and cut: to divide with a sharp-edged instrument. It needs a saw with a blade that chisels the wood. In contrast, a cross-cut, splits or saws the wood perpendicular to the grain, it needs a blade that shears the wood fibers.  Blades that rip-cut well do not cross-cut well.

These two different saws are referred to as table saws (for rip-cutting) and mitre saws (for cross-cutting). Other names for these saws are used. The problem with the name table saw, is that it is a descriptive name, rather than a functional name. Yes, it is a saw with a blade that emerges from a table. A functional name, would be to refer to it as a rip saw, perhaps even a stationary electric rip saw. This name focuses on the primary task of the saw, which is to make rip-cuts.

The name mitre saw has even more problems associated with it. However, the term chop saw (which is also used) at least provides it with a functional name. What we referred to as a table saw in the previous paragraph, also makes mitre cuts. Indeed it almost always comes with a mitre gauge to facilitate these cuts. However, given a choice, it is more efficient to use a saw referred to as a mitre saw. Both types of saws also make bevel cuts, which require the saw blade to change its angle with respect to a base, or table. A functional name, would be to refer to it as a cross-cut saw, perhaps even a stationary electric cross-cut saw. This name focuses on the primary task of the saw, which is to make cross-cuts. Even using the name chop saw would be better than mitre saw.

The most important reason for opting to use a functional tool name is safety. While most professional woodworkers are informed about the differences between rip-cut and cross-cut saws, and the hazards of using cross-cut saws to make rip-cuts, this will not be reinforced if this function is missing from the tool name.

Update: The illustration below shows the difference between saw teeth used for ripping, and those used for crosscutting. 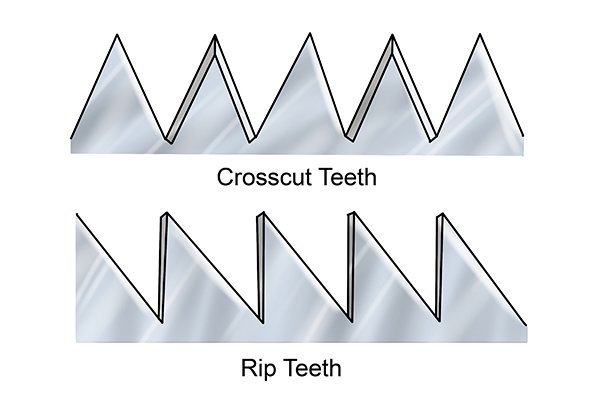