I have owned and driven a Mazda 5 since 19 October 2012. That is over five years ago. I still don’t know where all of the controls are located. Worse: I don’t really want to know, or to waste more time learning about the car. The little I have learned these past years, is that there is nothing intuitive about the location of most controls.

I might consider buying a new EV, but the vast number of control mechanisms is disuading me. Here is a photograph of the interior of a Hyundai Kona. I will not even bother to guess what all the controls are for, but will only mention that the steering wheel has 17 control devices, in addition to its ability to steer the vehicle. There are control devices everywhere, and owners have no choice in their placement.

This situation arises because automotive manufacturers are failing to design cars that meet the real needs of their customers. In plain words, they are not meeting my needs! I have never actually had a conversation with living people where anyone has expressed a need for more controls.

The controls of a 1966 Volkswagen Typ 1 include: a speedometer and odometer,  with warning lights for oil pressure and battery charging status (output exceeds input); an optional fuel gauge; two knobs in the centre of the dashboard where the one closest to the steering wheel is for lights, while the other is for windshield wipers and washer; the radio has two dials, one for selecting channel the other for volume, plus push-buttons with pre-selected channels. Not visible in the photograph is a red button that activates 4-way flashers, and the ignition, where a key can be inserted to  turn on, start and turn off the engine. Non-control items on the dashboard include an ashtray and a glove box on the passenger side below a hand hold. However, the button on the glove box is a control device. On the steering wheel there is a horn (silver coloured) and turn signals. Below the dashboard on the left is a device for opening the trunk. You will also see the gearshift lever (4 speed transmission plus reverse), and the emergency brake. Not visible beside the emergency brake on the floor are heating controls. Visible on the floor there are three foot pedals for clutch, brake and accelerator, respectively. On the door is a window winder, the window above this is a “quarter window” that also has its own opening device. There is also a mechanism to open the door that is not in the photograph. This vehicle is identical to one I had between December 1966 and August 1971.

This does not mean that all proposed EVs are as messy as a Hyundai Kona. Honda has a much more austere approach. 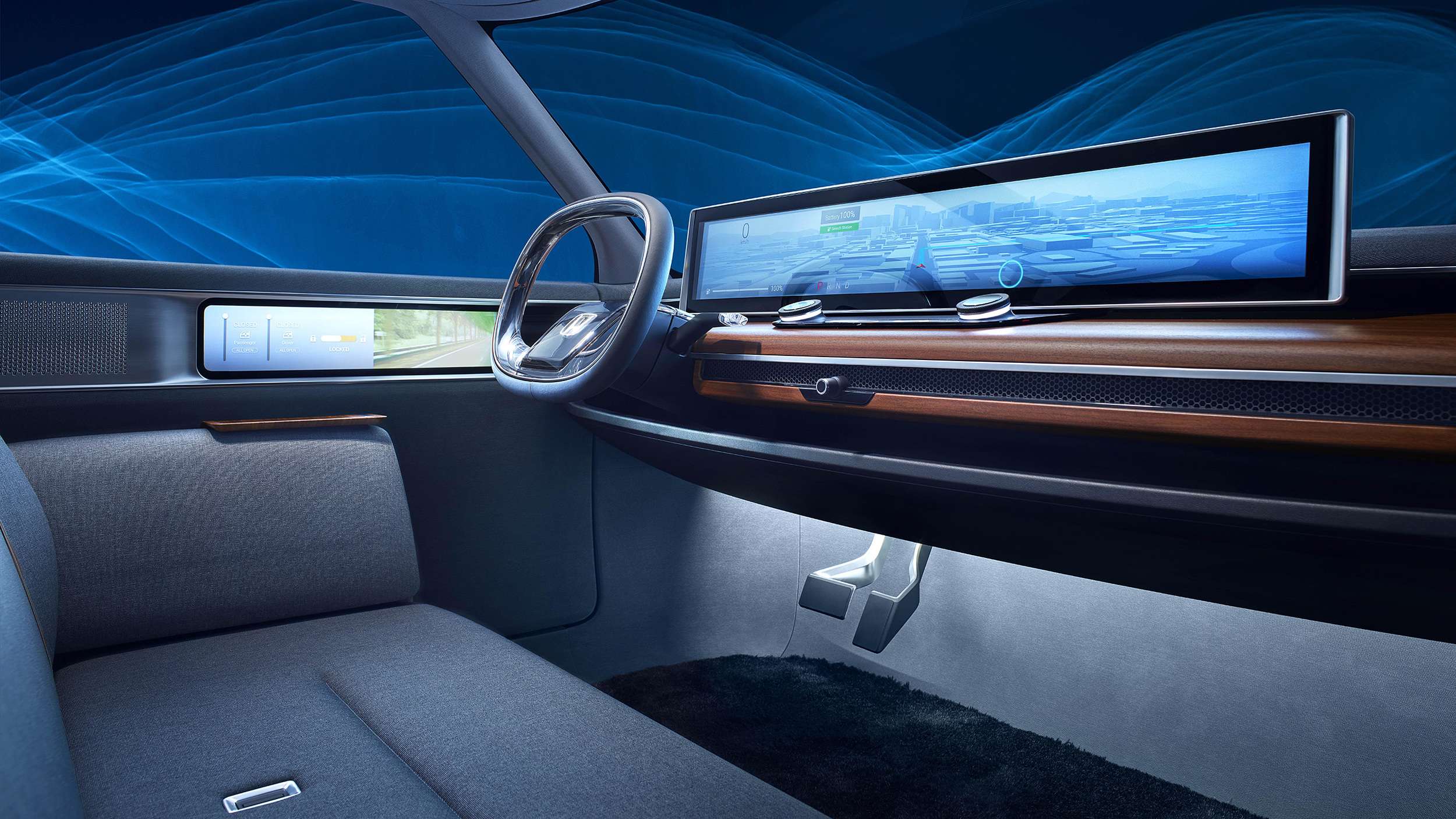 One potential difficulty with this Honda, is that the large screen will encourage increasing the number of virtual controls. Instead of spreading over physical space, they will spread over the vehicles virtual space. One advantage of limiting people to a small screen, is that it will be difficult for designers to add additional controls. Instead, they will be forced to focus on the most important controls.

Is there hope? One potential area of hope is the elimination of visual controls altogether, and to replace these with voice control. The advantage is that the vehicle will be at the mercy of the user. Users who master a larger vocabulary of reserved words will be able to have greater control over vehicle minutiae. Those without this mastery will be served defaults. It is a situation that could suit almost everyone.